Dr. Pamela Winsor is a literacy expert supporting CODE’s work in Ghana, Kenya and Mozambique. A fellow alumna of the University of Lethbridge, Dr. Winsor and Senator Fairbairn were colleagues in literacy education and supporters of CODE. Thank you to Dr. Winsor for her help in preparing this tribute.

Along with her many colleagues and friends, CODE mourns the passing of Senator Joyce Fairbairn. Senator Fairbairn was a kind and determined woman who was a strong advocate for literacy action in Canada and around the world. Senator Fairbairn was a long-time friend of CODE, supporting our mission to help more children in sub-Saharan Africa learn to read, build their literacy skills and get a quality education.

“Literacy is the foundation of everything we do” – Senator Joyce Fairbairn

Dubbed, “Canada’s Literacy Senator”, Senator Fairbairn worked closely with many Canadian literacy partners, once telling an assembly of literacy educators that promotion of literacy had become the cause of her life. Senator Fairbairn chose literacy as a cause for her attention soon after being appointed to the Senate by then Prime Minister Pierre Trudeau in 1984. Whether speaking formally or joining in friendly conversation, she exuded enthusiasm for and commitment to doing her part to enable all Canadians – youth and seniors – to achieve their full potential.

Throughout her more than fifty-year career, many honours have been bestowed upon her.

Senator Fairbairn was made a member of the Order of Canada in 2015 in recognition of her career, her advocacy for literacy and for the Paralympic movement, and her work with Indigenous people. On Literacy Action Day 2002, Senator Fairbairn was presented with the first-ever Canada Post Special Recognition Literacy Award in appreciation of the Senator's commitment and dedication to literacy. In 2004, her hometown university, the University of Lethbridge, bestowed upon her an Honorary Doctor of Laws. She is pictured below at that time with members of the Faculty of Education whose research focuses on language and literacy. Left to right Dr. Michael Pollard, Dr. Robin Bright, Senator Fairbairn, CODE Volunteer, Dr. Pamela Winsor, and Dr. Cynthia Chambers.

Senator Joyce Fairbairn passed away on March 29, 2022. Her long and distinguished public life was acknowledged through the lowering of flags in Lethbridge and Ottawa. 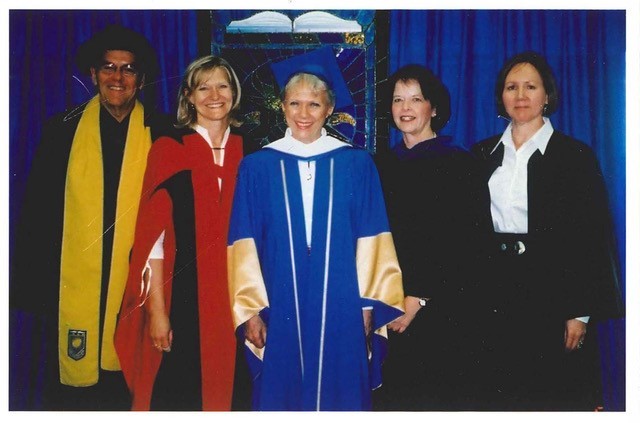