To Keep Girls in School, We Have to Tackle the Barriers They Face to Get an Education 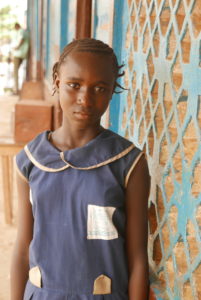 Fatmata grew up living with her grandmother. One of 6 children, her parents needed some extra help taking care of her to make sure she could have the best life possible.

When she was only 10 years old, her grandmother sadly passed away. Fatmata moved in with her older sister, who was married and expecting a child. It was then that she faced the biggest barrier in her young life: she was no longer allowed to go to school.

“After the birth of my niece, my sister prevented me from going to school and demanded that I help her with her baby and engaged in the sale of sachet water in the market,” Fatmata shared.

As a girl, she was quickly placed in a caregiver role – looking after her niece and helping her sister with her business became more important than her education.

Fatmata told us this was a difficult time: “I felt very bad and ashamed of myself[,] especially whenever I [would] see my classmates on the street going to school.”

Finally, her father saw her selling water at the market. He was shocked to see her outside of school during the day. Having taken advantage of Fatmata providing free childcare and labour, Fatmata’s sister had kept it a secret from their family that she was keeping her from school.

Her father quickly brought Fatmata home to live with him and brought her back to school. She had missed 6 months of classes, including the exams she needed to take to move up a grade the following year. Fortunately, she was able to enroll in a class to make-up for the time she had missed and prepare for the next academic year.

Fatmata’s story is all too common in the communities CODE works in across sub-Saharan Africa, and in many developing countries. UNICEF estimates that 129 million girls are out of school around the world. Girls are often expected to take on childcare, cooking and cleaning responsibilities for their families, while boys’ education is more frequently prioritized so they can get a job and earn an income one day.

At CODE, we strive to remove barriers that contribute to the marginalization of girls like Fatmata. We make it our priority to empower girls to learn and succeed as we know the dramatic benefits that result when they develop literacy skill and complete basic education.

Girls and boys deserve equal access to an education, to pursue their own careers and have control over their household income when they grow up. Additionally, we know when girls receive an education, they invest their skills, talent and resources back into their communities.

According to the World Bank:

“Both individuals and countries benefit from girls’ education. Better educated women tend to be more informed about nutrition and healthcare, have fewer children, marry at a later age, and their children are usually healthier, should they choose to become mothers. They are more likely to participate in the formal labor market and earn higher incomes.”

Fatmata is now 12 years old and finishing Grade 6 at a school that is receiving support from CODE. She loves her social studies class because she gets to learn about her country and other places around the world. She told us that she wants to be a lawyer when she grows up, to make sure thieves and criminals are brought to justice. We look forward to continuing to support the education of children like Fatmata and helping them access the tools and resources they need to build a brighter future.