Join us for our next “CODE Connects – LIVE”

Our new hour-long “CODE Connects – LIVE” virtual events series aims to share the diverse voices, perspectives, and experiences of individuals working to tackle the global learning and literacy crisis. It’s an opportunity to exchange ideas, ask questions and gain insights into CODE’s programming. We invite our supporters, allies, and friends to join us live (via Zoom or Facebook) for our next scheduled event. 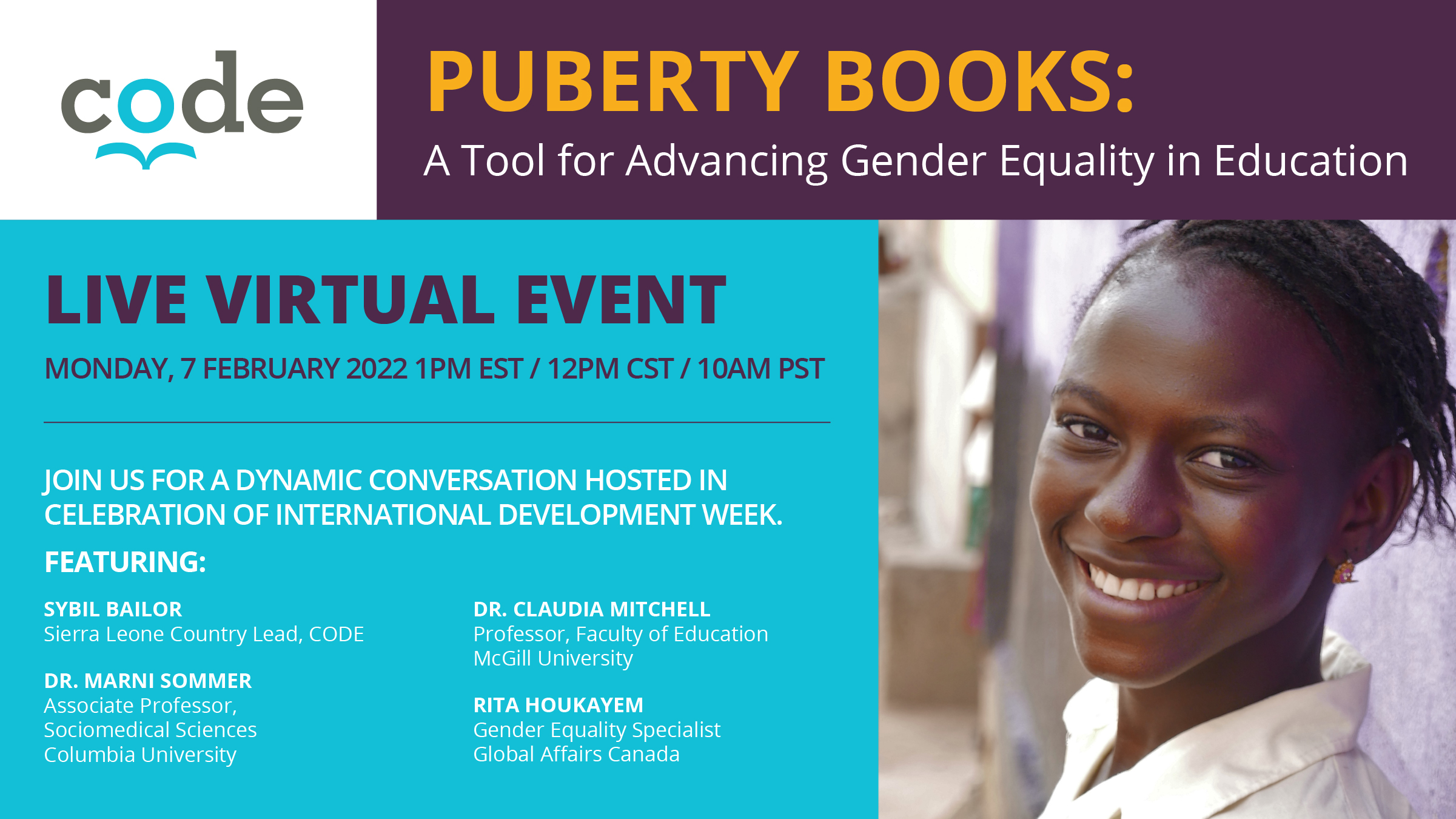 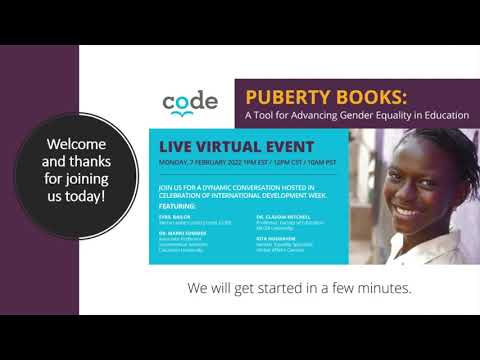 As part of the Government of Canada’s International Development Week, CODE was pleased to host a conversation with international gender and education experts on how to advance girls’ education through the use of puberty books. This hour-long event provided critical insights into a participatory and youth-centered approach to content creation, as well as the intersectionality of SDG#5 Gender Equality and SDG#4 Quality Education. Thank you to all who joined us.

Our conversation benefited from the experiences and expertise of the following:

Dr. Marni Sommer, DrPH, MSN, RN, has worked in global health and development on issues ranging from improving access to essential medicines to humanitarian relief in conflict settings. Marni’s particular areas of expertise include conducting participatory research with adolescents, understanding and promoting healthy transitions to adulthood, the intersection of public health and education, gender and sexual health, and the implementation and evaluation of adolescent-focused interventions. Her doctoral research explored girls' experiences of menstruation, puberty and schooling in Tanzania, and the ways in which the onset of puberty might be disrupting girls' academic performance and healthy transition to adulthood. She presently leads the Gender, Adolescent Transitions and Environment (GATE) Program, based in the Department of Sociomedical Sciences. GATE explores the intersections of gender, health, education and the environment for girls and boys transitioning into adulthood in low-income countries and in the United States. GATE also generates research and practical resources focused on improving the integration of menstrual hygiene management and gender supportive sanitation solutions into global humanitarian response.

Rita Houkayem is a Gender Equality Specialist at Global Affairs Canada working in the Partnerships for Development Branch. She supports staff and partners in designing innovative international development projects that integrate gender equality into their programming and policies and advocates for the empowerment of women and girls through policy development, knowledge-sharing and trainings. She started her career at UNESCO in Paris in the Health and Education sector. She focused on providing support for international programs and publications that focused on gender equality and comprehensive sexuality education. She has also worked at Innovation, Science and Economic Development (ISED) Canada and worked on projects that addressed the digital gender divide and the empowerment of women and girls in the world of ICT. Rita holds a Master’s Degree in International Affairs from the Norman Paterson School of International Affairs, Carleton University and a Bachelor’s Degree in International Development Studies, French and a minor in Political Science from the University of Toronto.

Sybil Bailor has over 20 years of international development experience in Sierra Leone/ West Africa and in the United Kingdom.  Sybil is a seasoned program manager, technically experienced in governance, education, civil society capacity building, addressing poverty and gender issues, implementing and managing various development programs with direct reporting capabilities to boards of directors at both at national and international levels.

Sybil was the Executive Director for the ENCISS (the largest governance program in Sierra Leone) and most recently the Chief of Party for the Girls Education Challenge (the largest girl’s education program in Sierra Leone), a DFID funded program managed by Plan International in Sierra Leone. Sybil is currently the Country Representative for CODE Sierra Leone a Canadian NGO and is a member of the Business and Professional Women’s Network and Women on Boards Sierra Leone. Sybil holds a Master’s Degree in Charity Accounting and Financial Management and certificate in Women’s Entrepreneurship from Cornell University.

Claudia Mitchell, PhD, FRSC is an Honorary Professor in the School of Education, University of KwaZulu-Natal and a  Distinguished James McGill Professor in the Faculty of Education, McGill University where she is the director of the Institute for Human Development and Well-being and the founder and director of the Participatory Cultures Lab. Her research focuses on participatory visual and arts based approaches to working with young people and communities in relation to addressing critical social issues such as gender equality and gender based violence. She has been working on  girls’ education  for 25 years and in a wide range of country contexts in West Africa, Southern and Eastern Africa, and East Asia Pacific. She currently leads several   large projects focusing on girl-led ‘from the ground up’ policy making  in Canada,  South Africa and Mali.  She is the co-founder and Editor-in-Chief of the award-winning journal  Girlhood Studies: An Interdisciplinary Journal. 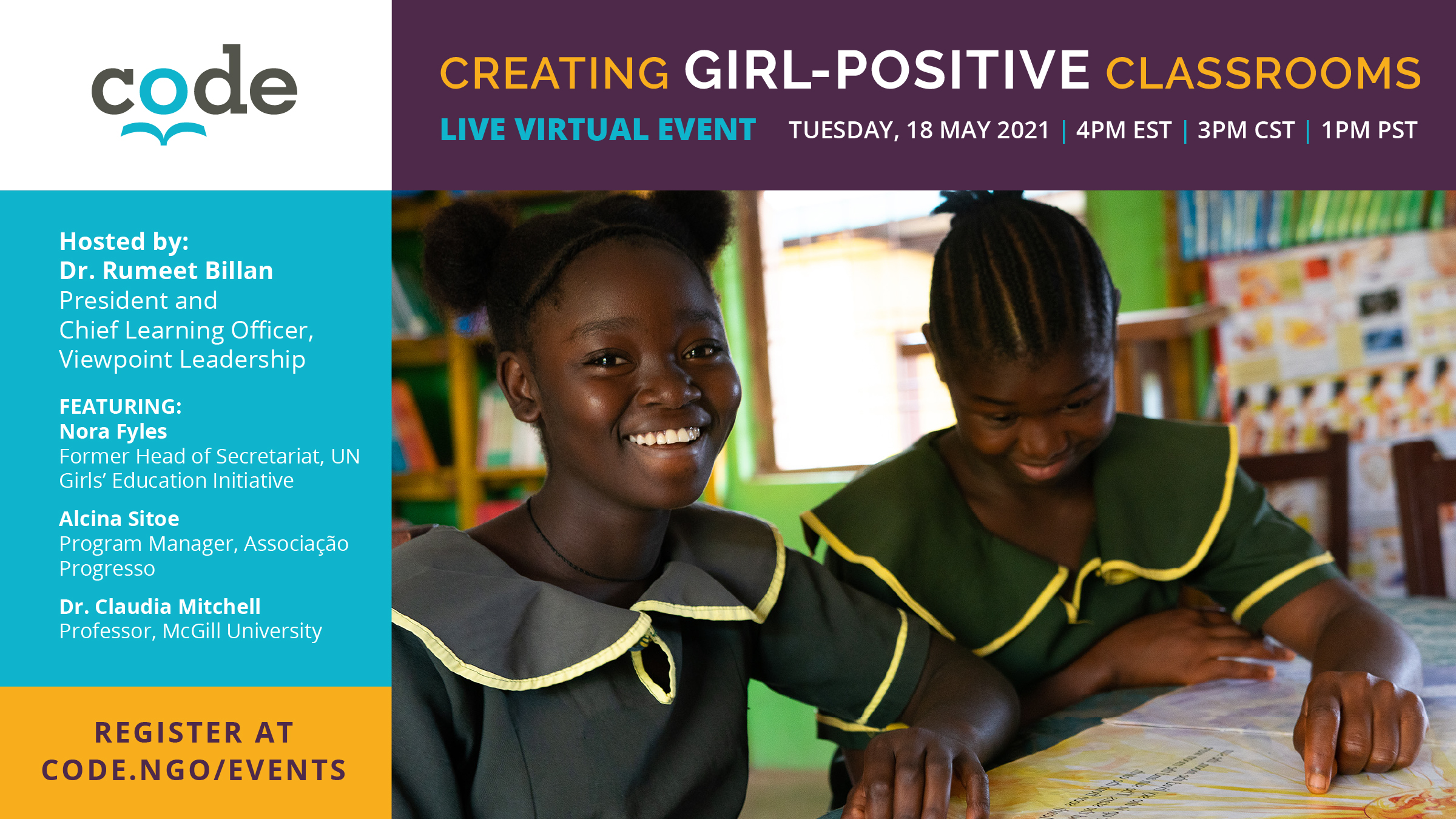 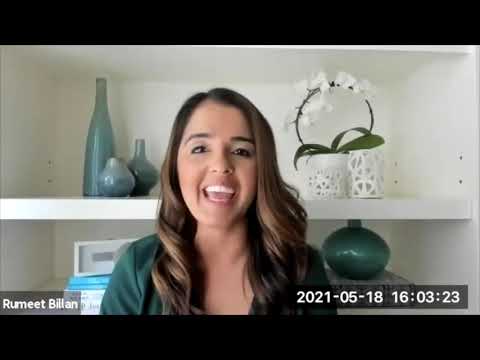 Thanks to those who joined CODE and our host Dr. Rumeet Billan for an hour-long conversation with international gender and education experts as they shared insights and experiences on creating classroom environments that help girls succeed in school. From pedagogy and gender representation in books to cultural biases and gender-based violence –  all too often schools struggle to provide a positive learning environment that helps girls reach their full potential.

Our conversation benefited from the experiences and expertise of the following:

Nora Fyles is the former director of the United Nations Girls’ Education Initiative (UNGEI), a multi-stakeholder partnership committed to advancing gender equality in education and the empowerment of girls and women through education. Under her leadership, UNGEI led global campaigns to advance gender equality and to champion the rights of girls and women, and established programs for join advocacy and action including the Global Working Group to End School-Related Gender-Based Violence (SRGBV), the G7-endorsed Gender at the Centre Initiative, and the UNGEI-Global Partnership for Education Gender Responsive Education Sector Planning program.

Before joining UNGEI, Ms. Fyles headed the Education Policy team for the Canadian International Development Agency (CIDA) from 2003 to 2012. Prior to her time at CIDA, Ms. Fyles worked for a multilateral organizations, NGOs, educational institutions and government ministries in Canada, Asia, Africa and Central America with a focus on education and gender issues. Ms. Fyles holds an MA in International Affairs from the Norman Patterson School of International Affairs, Carleton University, and a MEd from the Ontario Institute for the Studies of Education, University of Toronto.

In April 2021 Ms. Fyles relocated to Ottawa and is working as a private consultant.

Claudia Mitchell, PhD, FRSC is an Honorary Professor in the School of Education, University of KwaZulu-Natal and a  Distinguished James McGill Professor in the Faculty of Education, McGill University where she is the director of the Institute for Human Development and Well-being and the founder and director of the Participatory Cultures Lab. Her research focuses on participatory visual and arts based approaches to working with young people and communities in relation to addressing critical social issues such as gender equality and gender based violence. She has been working on  girls’ education  for 25 years and in a wide range of country contexts in West Africa, Southern and Eastern Africa, and East Asia Pacific. She currently leads several   large projects focusing on girl-led ‘from the ground up’ policy making  in Canada,  South Africa and Mali.  She is the co-founder and Editor-in-Chief of the award-winning journal  Girlhood Studies: An Interdisciplinary Journal.

Alcina Sitoe has over 15 years of experience leading the implementation of development projects in the education sector in Mozambique with a number of NGOs including PLAN International and Lutheran World Relief. Alcina Sitoe is currently a Program Manager at CODE’s partner in Mozambique, Associacao Progresso. She is Progresso’s lead on the BETTER project, funded by GAC, since 2016 and before that, also worked on the GAC funded Promoting a Literate Environment in Mozambique (PLEM) – also implemented by CODE. She is a key member of BETTER’s research team piloting “literacy mentoring” for student teachers in Mozambique and co-authored the paper published in the Global Education Review.

Scott Walter was appointed the Executive Director of CODE in 2007. In November 2020, he was named the Deputy Chair of the Global Book Alliance Secretariat. He brings to CODE a wealth of experience in international education, development and leadership with both government and non-governmental organizations. He came to CODE from the Canadian International Development Agency (CIDA), where, as Principal Advisor Education in Policy Branch, he provided leadership to the Government of Canada on education issues in international development. This included Canada’s involvement at the multilateral level in the global Education for All-Fast Track Initiative and the Canadian Global Campaign for Education. Before joining CIDA, Mr. Walter was the former Director of International Development at the International Reading Association in Washington DC, where he was responsible for programs and advocacy under global literacy development, spearheading such initiatives as the 32-country Reading and Writing for Critical Thinking network of educators and the Pan-African Reading for All conferences.

Scott’s varied background includes work with the Canadian publishing industry to establish the International Publishing Partnership and a two-year period as a classroom teacher in Lesotho under the auspices of the World University Service of Canada. He has been committed to CODE and its education initiatives abroad since the 1980’s. In 1988, he was posted to Tanzania as the Director of CODE’s East Africa office earning distinction for the establishment of programs such as the Children’s Book Project, a CODE partner recognized for its outstanding work with a UNESCO International Literacy Award. He returned to Ottawa in 1991 to take up the position of CODE’s Director of International Development. He is now continuing this commitment as the Executive Director of CODE and the CODE Foundation, working alongside partners and local stakeholders to bring tangible education results to the developing world. Scott holds an undergraduate degree from McMaster, a Masters from The University of Waterloo and a B.Ed. from Queens.