Written by:
Wendy Saul, Professor and President, Board for the International Book Bank, Ret.

When I arrived in Liberia as a CODE volunteer, the nation had just emerged from a brutal, bloody, civil war. As Helene Cooper recalls in her memoir, The House at Sugar Beach, those with the wherewithal fled or were killed. Left behind, to rebuild the country, were mostly a struggling band of educators with whom our team worked.

Liberians teaching early childhood education were often just primary school graduates themselves, and certified high school teachers typically had only two years of college. When asked to demonstrate strategies like readers’ theatre, our workshop participants struggled. And their writing skills were weaker than their reading. To this day, the proportion of qualified teachers in Liberia is staggeringly low. According to the World Bank, an estimated 53% of primary teachers in Liberia do not have any teaching qualifications. As we sweated together, I would often look out into a room, remembering that, according to statistics, 7 out of 10 of these women had been raped.  Everyone present could recall murdered or maimed friends and relatives, child soldiers, famine and chaos.

Liberian English was difficult for me to understand. Think Reggae music and multiply times three. The strategy that enabled me to conduct workshops successfully went like this: Address questions to the group and ask a Liberian volunteer to record the responses on the waxy blackboard provided. I would then use these notes to check on what I thought had been said.  Most note-takers were wanting, but there was one guy, I came to call him “the scribe” whose notes were brilliant—clear, to the point, easy to read—as good as any notes I had ever seen taken anywhere. 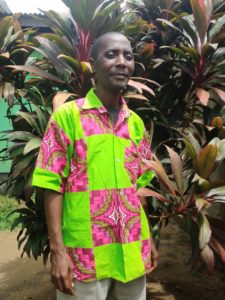 The scribe, his real name is Woryonwon Roberts, was working in the WE-CARE Foundation library, our CODE partner in Liberia. Though he had graduated from high school, he could only manage to take some classes, usually one at a time, at a local Baptist institution. Over the years Woryonwon and I became friends. I learned that as a small child he was stolen from his mother by his father, a “char(coal) boy” who wanted him to learn to read and write. A kind woman finally paid for his school uniform and he easily skipped from one grade to the next. And then the war came. Woryonwon began teaching in small villages, learning several languages along the way. And the war ended. Through the CODE program he became a trainer and then a certifier of trainers.  He wrote children’s books which CODE and WE-CARE published. In the meanwhile, I think he read nearly every book in the WE-CARE Library.

For context, CODE and WE-CARE have been working together since the late 2000s. The first project they teamed up on was Reading Liberia, a comprehensive literacy intervention initiative for primary schools in the country. To this day, Woryonwon continues to inspire other teachers to keep putting children at the center of the learning process.

As a U.S.-based professor, I tried to get him a scholarship for graduate school, but the immigration policies of my country made that impossible.

I recently got word that Woryonwon is beginning his graduate education online. He is thrilled and I am thrilled.

Woryonwon himself says CODE supported him to develop his skills and passion for teaching.

“I wanted to pursue further studies in education, particularly teacher education and/or literacy instruction, to have the advanced knowledge, skills and qualification to continue to help empower people through literacy and learning as envisaged by CODE.”