Passion in Action – A Support Story

“If you want to make the world a better place, the best way to do that is by empowering people to improve their own lives. That is what CODE does.”

Since he was a teenager, Réal Lavergne’s ambition has been to make a difference in people’s lives. He has successfully turned that determination into a lifetime of professional and personal fulfillment as a civil servant, volunteer, and donor, contributing considerable time, energy, and financial resources to helping people in some of the world’s poorest countries.

This includes Sierra Leone, a desperately poor country ravaged by a decades long civil war and the Ebola epidemic of 2014. Here, Réal has long supported CODE’s efforts to train teachers, and create and distribute inspiring children’s books – benefiting tens of thousands of girls and boys.

Most recently, Réal lent his support to our “When I Grow Up” online campaign – a campaign that was enabled by Réal’s pledge to match public donations over the holiday season. Inspired by Réal’s commitment, several other donors also contributed to the creation of a “match fund”. A campaign is currently underway to help initiate CODE’s newest program in Sierra Leone, slated to begin early in 2020.

As a young man, Réal took seriously the values he’d grown up with – including the importance of sharing with and caring for others. Though he initially planned to become an architect – a profession he felt combined both his creative and analytic sides – Réal soon understood that his true passion was for public service.

It was during the course of his work with CIDA where he first encountered CODE.  It’s a story that, when he tells it makes eyes shine, showing his genuine passion for CODE’s work.

According to Réal, his role at CIDA was to improve the agency’s relationship with the civil society organizations that it funded. As an aid-effectiveness expert, one of his mandates was to reform reporting standards so that they focused more on the actual results that programs were delivering to people and countries in need.

He asked all the CIDA-funded organizations at the time to tell him their stories – the stories about their work and the difference they made.  And in Réal’s estimation, of all the organizations who responded, CODE offered the most compelling story.

It makes a certain kind of sense that CODE –  an organization that recognizes the important role that stories play when it comes to improving the literacy skills of children and youth – would come to Réal’s attention in response to his unique request. 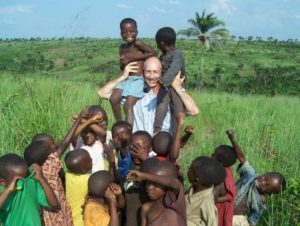 According to Réal, it was CODE’s strategic, multi-faceted approach to literacy skills development through teacher training and book publishing that made it so effective at improving the quality of education available to children in Africa.

When he looked at CODE’s results in Tanzania, in particular, he saw our long track-record of success working with our local partner, the Children’s Books Project (CBP). Together CODE and CBP had established the foundations for a vibrant children’s book publishing sector, while at the same time strengthening the capacities of local teachers to effectively use these books in their classrooms to improve early-grade reading instruction.

He saw that we could demonstrate the power of our impact in the CODE-supported schools, which consistently out-performed non CODE-supported schools on the country’s national exam results. He also admired CODE’s success delivering sustainable solutions, thanks to our focus on building local capacity.

When he retired from the civil service, Réal’s dedication to effective international development continued, but now in the role of an informed and engaged donor.

He provided seed funding for CODE’s very first project in Sierra Leone, supporting the training of teachers and the publication of high-quality books for children written and illustrated by Sierra Leonean authors.

“You must see these books! They are so powerful! All you have to do is to read these stories, to see how powerful they are, to understand what children in Sierra Leone are up against. But thanks to these books and CODE’s programs, we can also see now what these children can achieve.”

Much to his delight, the success of this initial investment in CODE’s work helped attract even more funding to this important work, enabling CODE and its local partners (PEN International and The Association of Language and Literacy Educators) to train even more teachers and to publish and distribute even more great local books.

Thanks to Réal this investment also helped to support children in the Democratic Republic of Congo (DRC), another impoverished country impacted by decades of conflict, where communities have also benefited from Réal’s dedication and expertise.

Inspired by CODE’s model, Réal helped to not only create a school library in a remote, underserved region of the DRC, he also ensured that the beautiful books he helped to create in Sierra Leone were translated and delivered to students there – even undertaking much of the work involved in translating the titles from English to French himself!

Réal reports that the CODE books became the cornerstone of this new library. And even amid the tragic violence that continues to plague the DRC, the library and books are still there, working to provide children with access to the education that they deserve and that they simply would not otherwise have.

“Of all the organizations I have encountered during my career in the international development field, CODE was one of those that most impressed me as one I could trust to make effective use of any money I could send their way. Don’t say I am being generous. This is a strategic decision. CODE offers a good deal and a good return on my investment. If you want to make a difference in the world, this is how. This is what everybody should be doing.”

Thank you Réal for believing in the value of CODE’s work and for sharing in our vision of a world where every child can read and realize their full potential.

Réal has also turned to a new passion as President of Fair Vote Canada, a citizens’ organization dedicated to the reform of our electoral system. As he explains, “I became involved in this because I believe a proportional electoral system like they use almost everywhere in Europe would lead to better policy in all areas, including Canada’s involvement in international development. Like everything else, this was a strategic choice for me — and an opportunity to stretch my wings in something different.”